Lampeter-Strasburg Marching Band
A Tradition of Quality ... a Commitment to Excellence 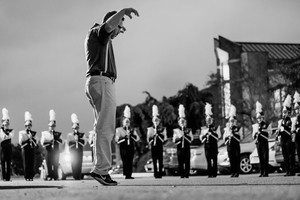 The 2022 season will mark the 20th at the helm of the Lampeter-Strasburg High School band program for Mr. Larry Royer. He also directs the concert and jazz bands at both the high school and at Martin Meylin Middle School. Prior to his return to L-S, he served as the band director of Ephrata High School from 1994 until 2002.

Mr. Royer is a graduate of Lampeter-Strasburg High School (class of 1990), and was a member of the Pioneer Marching Band in the late 1980s, the peak years of competition. Throughout his musical career, his principal instrument has been the trombone, and, although he was never a drum major, he wishes he had tried out. He did, however, participate in a myriad of festivals including All-State Band.

Mr. Royer was among the group of band directors that created the Lancaster County Marching Band Coalition in 2014. For the 2020 season, the coalition acknowledged its expansion throughout south-central and southeastern Pennsylvania by renaming itself the Pennsylvania Marching Band Coalition. He ranks rethinking marching band and developing the jazz program at L-S as the two most important accomplishments of his professional career.

Mr. Royer lives in Strasburg. He has three sons, two of whom have graduated, and one of whom is in eighth grade. 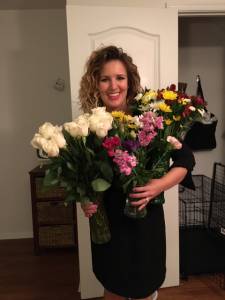 Mrs. Kristin Novak serves as assistant director of the L-S Marching Band, a position she assumed in 2020 after one year as music and marching instructor. Mrs. Novak is a 2008 graduate of Manheim Central High School where she marched for five years. During her time with the Marching Barons, she served as a section leader, soloist, and drum major. Throughout high school she also participated in jazz band, spring musicals and various PMEA ensembles including All State Band and MENC (now nafme) All Eastern Band. She also earned both the John Phillip Sousa band award and Woody Herman jazz award in her senior year of high school.

In 2012, Kristin graduated from The Peabody Conservatory of the Johns Hopkins University as a double major earning a Bachelors of Music in Trombone Performance and Music Education. During her college years, she also spent her summers wearing silly costumes and performing as a trombonist at various theme parks such as Dutch Wonderland, Busch Gardens Williamsburg, and Hershey Park.

Following her college graduation, Kristin took a teaching job outside of Baltimore City at Pikesville Middle School. Three years later she took a new job at North Harford Middle School in Harford County, MD and is currently the Director of Bands for grades 6, 7, and 8. Currently she teaches about 200 band students and runs a jazz band there. Kristin earned her master's in music education from Temple University in 2020.

Aside from music, Kristin enjoys running. She has participated in various 5k’s, 10k’s, Half Marathons, and Tough Mudders. She also ran her first (virtual) marathon this spring. When she isn’t teaching or running, you will likely find her hanging out at home in Willow Street with her husband Ryan and her two dogs, Wit and Luna. 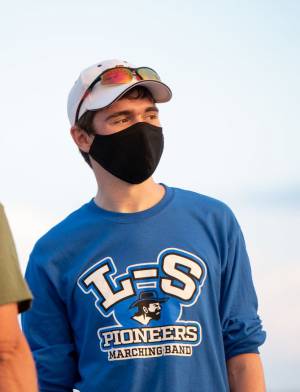 One day during the fall of 2007, Benjamin Pontz walked into a closet-turned-lesson room at Hans Herr Elementary School, where Mr. Larry Royer, in his first year as director of the fourth grade band (and absolutely terrified), talked him into playing the baritone horn. Over the subsequent nine years, Ben would spend hundreds of hours in every band L-S had. Ben graduated from L-S High School in 2016 after serving two years as drum major and president of the LSMB in its first two years as a member of the Lancaster County Marching Band Coalition. In high school, Ben also played in concert band, jazz band, orchestra, and pit orchestra.

In 2017, he returned to the program as a music and marching instructor. Since 2019, Ben has served as the Pioneer Marching Band's assistant director. He also coordinates the student leadership program, working extensively with the drum majors. In addition, he is responsible for writing (and occasionally announcing) the program notes for the band's field shows.

Ben graduated from Gettysburg College in 2020 with a music minor in addition to a double major in political science and public policy. At Gettysburg, he played in the Bullets Marching Band, with which he served as drum major for two years, as well as in the Wind Symphony, with which he toured Europe and recorded a CD. Beyond Gettysburg, he has participated in various musical endeavors at Chestnut Level Presbyterian Church. He recently completed a master's degree program on a Fulbright Scholarship at the University of Manchester, where he played in the university's brass band. Presently, he is a student at Harvard Law School.

Mr. Rob Shaubach joined the L-SMB staff in 2021 as staff arranger and assistant director. He will work extensively with the woodwinds. Mr. Shaubach is director of orchestras, grades 4-12, in the Lampeter-Strasburg School District and also directs the pit orchestra for musicals. He has been a teacher at L-S since 2001. Previously, he directed elementary school band and high school band, and, prior to his arrival at L-S, was an instrumental music teacher (band and orchestra) in the Manheim Township School District.

Mr. Shaubach is a graduate of Pequea Valley High School and Millersville University, and he earned his master's degree from Boston University. He currently serves as Vice President of District 7 of the Pennsylvania Music Educators Association (PMEA) and Vice President of the Lancaster-Lebanon Music Educators Association (LLMEA). An accomplished woodwind performer, he plays with Allegro Chamber Orchestra and in the pit orchestra at the Fulton Theatre.

Mr. Shaubach lives in Lancaster with his wife Carol and daughter Missy. On school days the entire family can be found on the L-S Campus as Mrs. Shaubach serves food in the Hans Herr cafeteria and Missy is an L-S student. When not teaching or performing, Mr. Shaubach enjoys camping, collecting and operating toy trains, and driving his 1972 Chevrolet C-10 pickup truck. 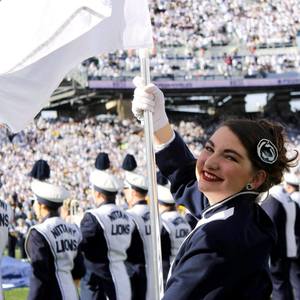 Amy Grier has served as color guard instructor for the L-S Marching Band since 2019. She is a key member of the band's visual design team and also works to select and train student leaders. Amy is a graduate of Lampeter-Strasburg High School, Class of 2014. She was a member of both the drumline as a bass drum player and a member of the color guard. She was also a part of the indoor color guard program for all four years of her high school career, which included a period in which the guard ranked in the top 50 groups in the World Guard International Scholastic Open Class.

After graduating from L-S, Amy attended college at The Pennsylvania State University. While attending Penn State, Amy participated in the Penn State Marching Blue Band. She was in the Silk line for all four years and spent two of those years as a captain. As a member of the Blue Band, Amy had the opportunity to perform at the Pinstripe Bowl, Taxslayer Bowl, Rose Bowl, Fiesta Bowl, and the Big Ten Championships. A few of her favorite moments from being in the Blue Band were performing in Beaver Stadium in front 107,000 fans, and marching in the Rose Bowl and Fiesta Bowl parades.

Amy graduated with a bachelor’s degree in Environmental Systems Engineering in May 2018. After graduation, Amy was married to her husband, Jason, in June. She is thankful to have had lasting experiences in the marching band community in both high school and college, and is excited to be back in Lancaster to work with her Alma Mater. 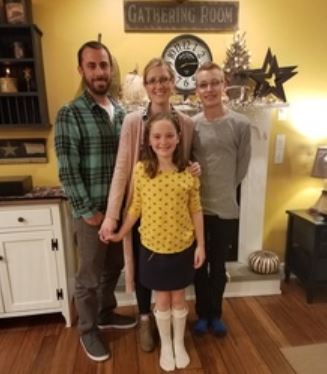 Percussion Instructor Scott MacFeat joined the L-S Marching Band staff in 2018, but his career as a drummer has spanned more than three decades since 1986, when he was three years old. Scott took drumming lessons for 15 years from local jazz teacher Larry Donley and drummed his way through Hempfield High School as a member of Marching Band, Jazz Band, Pit Orchestra, Orchestra, Talent Shows, Pep Band, etc. He graduated Hempfield in 2001, and, in the intervening years, has been teaching drumming lessons part time.

Scott graduated from Lancaster Bible College in 2008 with a bachelor's degree in Pastoral Ministry, and he completed a master's degree in Biblical Studies at Capital Seminary, LBC in July 2019. Scott is Pastor of Refton Brethren in Christ Church.

Scott has been married to his wife Amanda since 2007 and have adopted their son Alex and daughter Morgan.